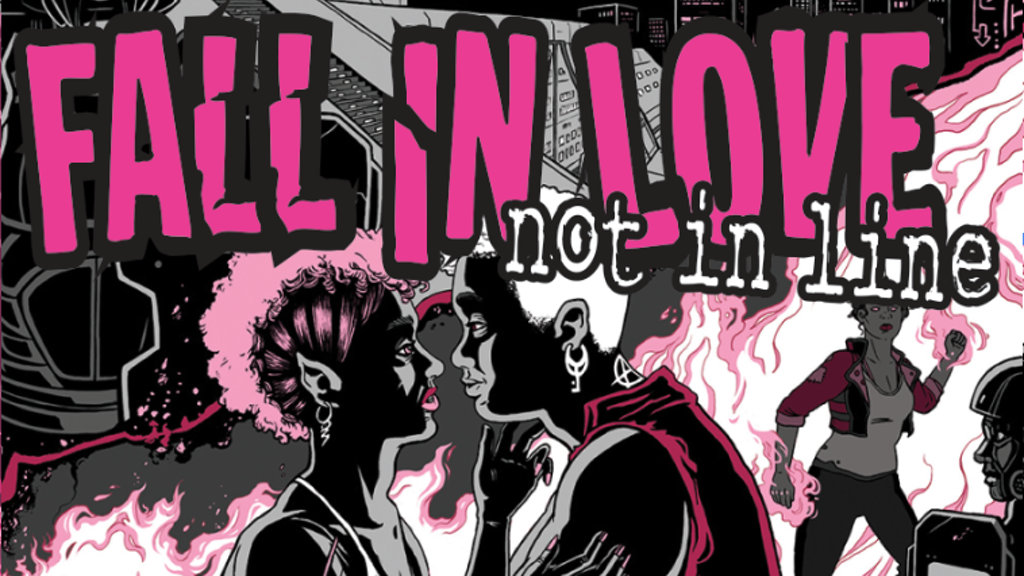 Misspent Youth: Fall in Love, Not in Line

Teenage rebellion in a messed-up future! Play the only kids that can stop the adults from ruining what's left of the world.

Latest Updates from Our Project:

I just paid the shipping deposit, so that means all the physical books for Misspent Youth: Fall In Love, Not In Line will start shipping tomorrow, (Wednesday). And with that, fulfillment is complete on our baby! I hope you all love it as much as we do! If there are any problems, or if you don't get your confirmation email/tracking # in the next two weeks, please reach out and let us know.

It has been our great pleasure to have been able to carry on the legacy of Misspent Youth, and there is even more to come! In particular, there is a horror game using the Misspent Youth rules, as well as a Superheroes game. Stay tuned!

Once we get word that everyone's copies have been sent out, we'll be adding community copies to our website, so if you know someone who might want it (especially if they are teachers or school organizations, libraries, etc. ), let them know, or grab one for them!

This year, we will be at Origins Game Fair (June) and GenCon (August) running games of Misspent Youth (and other stuff), so if you are headed there, you can get your books signed by Cliff, play games, but more, or just say hi (please do!).

Check out the recent actual play by Girlsruntheseworlds. They played Fall In Love, Not In Line last Thursday and it was great!


Ok, folks, I'll be back a few more times, I'm sure, but until then, you all have really meant a lot to us and your support has blown us away. Thank you, thank you.

Good news! I Received word from the printer about the physical MY:FILNIL books. They are in production and will be shipped to us on 1/10/23. Now, two things. 1) That is pretty awesome, given the state of printing, supply chain, and printing at the moment. BUT 2) I would take that with a grain of salt. I have yet to have anyone we've worked with over the last few years actually fulfill when they said they would, so I'd think that the date given is their optimistic assessment.

Still, if they end up being a little late, and we don't get the books in our hands until January 24 or so, that still means you'd probably have them in your hands by early February, which is exciting!

More updates as we get them, but thank you to everyone for your support and awesomeness!

Hey everyone! It's been a minute since our last update, but that's because we've been working hard to get the book into shape! And now, we've got some good news!

Misspent Youth: Fall In Love, Not In Line is finished!

The layout is done, and the PDF is on its way to everyone who backed the kickstarter! The printed books will be coming soon, but I don't have an exact quote from the printer, nor do I put faith in such quotes based on what we've learned about printing and shipping these last few years.

But it should be soon!

Also, a small point, but I want to have integrity about this: The screen-friendly PDFs of Misspent Youth and Sell Out With Me that Rob has produced over the last decade are soooo cool! They are much easier to read and play with online than regular PDFs. But they are a bit of work. So, we're sending out the regular PDF (which will look just like the printed book), and then Rob said he'd work with me to show me how to get Fall In Love, Not In Line into a screen-friendly form, too. I am not going to put a timetable on that, but it is on my wishlist!

Once the PDF distribution is done, you can also buy more PDF copies (or give them to your buddies, whatever) on our website (FraggingUnicorns.com) or on Drivethrurpg.com.

You can also go to https://www.fraggingunicorns.com/misspent-youth-download to find updated versions of the setting/dystopia sheet and the Permanent record/YO sheet, as well as downloadable/printable struggle sheets, case files (campaign trackers), other settings, and some more goodies.

Thanks again for all your support! More updates on printing/shipping as we get them!

Just wanted to pop in and give an update on our progress for Fall In Love, Not In Line.

We have finally exited Summer, or as we call it, convention season. We ran a TON of Misspent Youth games, which gave us valuable feedback. At ReaperCon in North Texas, we gave away a bunch of copies of Misspent Youth, Sell Out With Me, and Gangs of the Undercity to the UNT librarian who came by. We sold some too, lol. At Origins, we played a game with a gal who ended up sharing her story with us and how much Misspent Youth meant to her.  At GenCon, we kept getting people telling us how excited they were for the new book and asking for more games. So overall, a great Summer for Misspent Youth!

Regarding production of Fall In Love, Not In Line, all of our authors have turned in their settings and the majority of them have returned final drafts after editing notes. Mechanics are solidified, and final draft for the text should be done by the end of the month. I'm writing the safety tools/best practices bit in between a few other spinning plates, and then it is off to layout! So we are still comfortable with our December 2022 timeline, but as we've learned the last few years, no timelines are 100% solid.

We had a few pre-production meetings this last week as well with some creators who are interested in using the Misspent Youth system to create their own games, so keep an eye out for games "Powered by Misspent Youth" or something similar in the near future. I don't want to give away any genres, but both are places Misspent Youth hasn't gone yet... and the protagonists aren't just teens...

Also, I got permission to share this from a Misspent Youth fan, which I found wholesome, so I wanted to share.

"My name is (cool name), and a couple years ago I bought Misspent Youth. You also graciously sent me a copy of the supplement book, and asked to let you know how my game went.

I know I'm several years late, but I'm about to start a second game with my family and wanted to let you know how my first one went.

It was the very beginning of the pandemic isolation, and the end of my senior year of high school. It sucked being away from my friends, especially in a crucial time of the school year. Misspent Youth (plus the website Roll20) provided us an avenue to stay connected! Four of my closest friends and I played through an episode and a half over the twoish months left of school and LOVED IT! None of them had really played a roleplaying game before, but Misspent Youth got them out of their comfort zones, and they really got into character after the first couple scenes. My friends really bought into the world, coming up with NPCs and relationships with those NPCs that really brought the world to life. Real tears and laughs were had!

Our game was set in a post-apocalyptic world, where a religious sect controlled the surviving population with mantras of perfection and the coming salvation, as well as by controlling the food supply. Our Youthful Offenders were kids who escaped that control and brainwashing of this sect and had their own farm from which they provided food for the people. Oh, and they did all this on various forms of roller skates.

I wanted to thank you for this opportunity to stay connected! I'm currently living away from home by myself, and I miss playing games with my friends and family. I can't wait to play this game again!


A few nods to kick-ass friends of ours

In case you are looking for some other awesome stuff, a few of our really good friends  are doing a few different projects and I wanted to give them a plug.

First up is Coddlesworth’s Clockwork Circus issue #2. In Issue #1, two young halflings, Drum and Imari, began their journey to unravel the truth behind a dark legend. Seeking truths that could not be found in their native lands, they ventured forth into a world they never could have imagined.

Now, in Issue #2, after narrowly avoiding disaster in the streets of mehr'Kuldashta, Drum and Imari are escorted by their saviors to someone who may be able to help them in their quest to uncover the secrets of the "Book."

Have a game room that gets kinda funky after you play? Gift each player a gelatinous cube soap and perhaps the dice inside will incentivize them enough to get the hint.

Or maybe you just want to gift your players and/or GM a set of dice and a Jelly wiped out your party.

Or maybe you're a GM and don't have a gelatinous cube figure for your map!

Or maybe you just like the novelty of jelly soap.

Whatever your reason, we've got a tier for you!

Next, we have BLOOD & JUSTICE,  a setting of vigilante action, where the Punisher would feel right at home. It's a place where Cloak and Dagger would fight crime in the alleys while Venom and Witchblade battle it out on the rooftops. It's a place for anti-heroes writ large, where violence and gunplay meet detective work and investigations.

Blood & Justice: Welcome to Nocturne introduced us to the city of Nocturne, an Iron Age Superhero setting with a grim reality.

Now, Nocturne by Night expands upon the darker side of the world. It contains 62 new villains, advice for GMs on running a gritty Iron Age setting, and even what to do when your heroes take that final step and become villains themselves.

I normally wouldn't plug a more established company's kickstarter, but our pals at Rem Alternis are running their kickstarter and it will look awesome for them if it does well. And since Rem is a partner company to FUG, it helps us in the long run as well. Regardless, Catalyst Games is producing a revamp, upgrade, and rerelease of the Shadowrun Trading Card Game (which was pretty damn cool). A Shadowrun trading card game hasn’t been seen since the ‘90s, so this is extra exciting as newer fans of the game will likely never have known there was a trading card game.

Edge Zone will come in two boxes, the Magic box will focus on all things magic, and the Mayhem deck which will focus on the more physical aspects of the Shadowrun setting. Street Samurai, deckers, riggers and the like. You will be able to choose one to play, or get them both and mix and match your deck to your tastes.


Ok, that's it for the update. See y'all next update!

There isn't much to report at this point, but I thought I would touch base and let you know where we are at in the process of making Fall In Love, Not In Line.

1) Settings are all turned in. All of our guest authors have turned in their first drafts for their settings, and all but two of those have turned in final drafts as well.

2) Pilot episodes for all of the settings are nearly complete.

3) Backerkit numbers and expected shipping costs have been collected.

5) Most of the writing is done on the book, but we're always revising and playtesting.

6) As of now, we are still looking good for our December 2022 fulfillment date.


In related news, we'll be running Misspent Youth Games at GenCon, playtesting new settings and pilot episodes, and refining the rules! So if you'll be at GenCon, come play games with us!